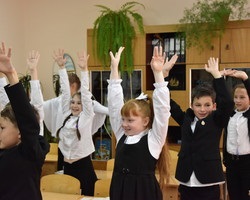 Regular physical activity, increasing physical education and active classrooms not only protect schoolchildren’s health but also improve their academic achievement. This is the finding of a wide-ranging review on Physical Activity and Academic Achievement carried out by WHO/Europe as part of its drive to ensure that young people get at least 60 minutes of moderate-to-vigorous physical activity every day.

Today in countries of the WHO European Region, children and adolescents aged 5–17 years spend nearly two thirds of their time at school in sedentary activities and only five percent of school time – doing physical activities.

According to the WHO/Europe review, increasing the amount of physical activity can have a positive impact not only on children’s health and well-being, but also on their performance in the classroom.

“Physical activity is beneficial for the development of cognitive, motor and social skills, as well as and good metabolic and musculoskeletal health. There is also a knock-on effect on academic performance,” says Stephen Whiting, Technical Officer in the WHO European Office for the Prevention and Control of Noncommunicable Diseases (NCDs) and one of the authors of the Umbrella Review of Physical Activity and Academic Achievement.

Schools provide the perfect opportunity for children to reach the recommended levels of daily physical activity.

The trend, however, is for more and more activities and classes to be sedentary, and the desire for good test results in academic subjects has shifted emphasis away from physical education and sports activities at school.

But the two can go hand in hand.

“The traditional school approach has been ‘indoors for learning, outdoors for playing’, but education systems around the world are waking up to the impact of the outdoors on learning”, says Alex Harrison, a teacher and early-years coordinator at the Prague British International School in the Czech Republic.

“And it is about more than having a place to let off steam before getting back to the serious business of learning.
“When children are playing outdoors, they are having self-directed learning time. Indoors, they are learning but it is directed by the teacher. Outdoors, it is self-directed and that in itself is preparing the children for when they have to sit down and focus on something else.”

The WHO Umbrella Review collated evidence from a set of systematic reviews and meta-analyses of how physical activity affects academic achievement worldwide.

“It is hard to measure the direct impact of physical activity on academic achievement in any one child or group of children, as it can be influenced by many different factors: physiological, cognitive, social and environmental”, adds Whiting.

“But the evidence we have reviewed is compelling and provides a way forward for school authorities to take positive action.

“It is vital that children get more physical activity, regardless of the effect on academic achievement, which in any case comes as a bonus with increased emphasis on physical education.”

The Umbrella Review found that academic achievement was likely improved by increased time in physical education, a switch from seated activities to more “active” classrooms, and regular physical activity – such as walking, dance, and sports – during the week.

With this in mind, WHO has identified a number of action areas for both schools and communities.

These include training teachers in physical activity promotion, creation of appropriate spaces, materials and resources, encouragement of innovation, and partnerships with community organizations.

Another key area is providing a safe environment for active commuting, rather than being driven to school or taking public transport.

“But it is also about simply allowing children to behave according to their own nature”, says Mr. Harrison.

“A colleague once remarked to me that children seldom walk anywhere. Instead, they hop, skip, run and combine movements, often with arms whirling around erratically”, he says.

“When children are engaged in self-directed learning, watch them – they are always moving. There is always a physical aspect.

“Why? Physical activity is hard-wired into children. Trying to separate it from academic development is pointless; the two are inextricably linked.”

As the all-round benefits of physical activity become more and more accepted, new ways of meeting the levels recommended by WHO are being tested around Europe.

Taking advantage of the power of role models for children, ministers in the United Kingdom are considering a scheme to extend the school day by two hours. Backed by British star athletes, the proposal would ensure that the extra time at school is spent in sports, drama, dance, and other activities.

Among the initiatives, some are following WHO recommendations stemming from the Umbrella Review, with community partnership, and engagement with young people on social media, being a key element in promoting a healthier future for children – hand in hand with their time spent learning at school.